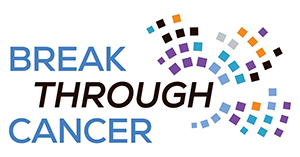 The Foundation is funding four TeamLab-based research projects with an initial investment of more than $50 million in grants to bring new approaches and innovative ideas as rapidly as possible to the clinical challenges of glioblastoma and ovarian and pancreatic cancers—diseases with poor prognoses in which progress has been slow.

“Break Through Cancer and its partner institutions are reducing the silos in the academic research system as never before,” said Tyler Jacks, PhD, President, Break Through Cancer. “In just 1 year’s time, we have built an expansive and impressive community of leading cancer researchers and physicians who can now work as one to accelerate the pace of discovery. This model of radical collaboration will empower many of the brightest minds in cancer research and maximize the capabilities of partner institutions.”

Added Dr. Jacks, “In the near future, we look forward to partnering with pharmaceutical and biotechnology companies as well as technology developers to further expand the impact of Break Through Cancer.”

“To be part of Break Through Cancer’s new model of research collaboration is extremely exciting,” said Rebecca Stone, MD, MS, Director of the Kelly Gynecologic Oncology Service and Associate Professor of Gynecology and Obstetrics, Sidney Kimmel Comprehensive Cancer Center at Johns Hopkins, and a principal investigator for Break Through Cancer’s funded research in ovarian cancer. “Break Through Cancer has created a fertile ecosystem for nurturing new ideas and rapidly bringing laboratory discovery to advance cancer care. We are confident this initiative will accelerate progress in a meaningful way. So many lives are counting on it.”

Break Through Cancer’s initial investment of $50 million will fund the following research projects for an initial 3-year period and will include researchers and physicians from all five partner institutions.

Recent research has shown that most, if not all, high-grade serous ovarian cancer originates as precursor lesions of the fallopian tubes. This presents an opportunity to reduce ovarian cancer incidence by exploring the impact of fallopian tube removal as a primary prevention strategy (known as opportunistic or prophylactic salpingectomy). The team will develop strategies to expand awareness of and access to safe and effective ways for women to undergo opportunistic salpingectomy, particularly in women who are done having children and are already undergoing elective abdominal surgeries.

The team will create a new cross-specialty collaboration between gynecologic and general surgeons, advocate for universal health insurance coverage for opportunistic salpingectomy, and create a national registry of women who elect this preventative intervention. The culmination of the project will be a public health campaign to educate women about opportunistic salpingectomy and empower them to decrease their risk of ovarian cancer.

At the same time, the Intercepting Ovarian Cancer team will create an ovarian “precancer atlas” by conducting exhaustive molecular analyses on many rare, precancerous fallopian tube lesions obtained from all four participating cancer centers. The team will identify new biomarkers that can be used to advance ovarian cancer screening and new, cutting-edge technologies for detecting and analyzing precancers, including “OvaSeek,” a system that will rapidly image excised fallopian tubes, and the “iCollector,” to nondestructively harvest living cells from fallopian tube lesions.

The majority of patients with ovarian cancer are diagnosed with late-stage disease. These women face cure rates as low as 15% depending on the subtype of ovarian cancer, a statistic that has not changed over the past several decades. A key factor underlying these poor cure rates is the ability of cancer cells resistant to chemotherapy to persist after front-line treatment. This persistent measurable residual disease (MRD) is clinically undetectable and represents “the seed” that eventually manifests as cancer recurrence.

The goal of this project is to transform the care of women with ovarian cancer by developing unprecedented capabilities for understanding and targeting MRD. To do this, the team will develop and benchmark the accuracy of new blood biopsy and “second-look” surgical technologies to monitor this state at high resolution, including extensive use of single-cell analysis.

Currently, trials of investigational front-line therapies use progression-free survival as their primary endpoint. Significant costs and the long duration of these trials stifle innovation and development of more effective initial therapies. This project includes a clinical trial to use the rate of MRD after front-line therapy as a primary endpoint.

Therapeutic development for glioblastoma has been stunted following several large and expensive phase III clinical trials that failed, despite encouraging preliminary results. A central challenge is the complexity of the human brain, which cannot be modeled perfectly in the laboratory.

The Revolutionizing Glioblastoma Drug Development Through Serial Biopsies project will demonstrate the safety and feasibility of carefully performed serial biopsies, while in parallel, will assess how promising new therapies directly affect these brain tumors. The team will investigate whether samples of cerebrospinal fluid and/or blood from patients may provide surrogate markers of drug activity. The objective of the project is to establish a new paradigm of therapy development for glioblastoma by utilizing longitudinal biopsies in the same patient to determine which therapies are successfully delivered to the tumor and exert an intended effect—two major hurdles which have historically hindered therapeutic advances. The extraordinary level of funding support from Break Through Cancer, highly unusual in glioblastoma research, will be essential to overcoming many financial and logistical barriers to converting the vision of longitudinal tumor sampling into a reality.

The KRAS gene, which is altered in more than 90% of pancreatic cancers, has long been believed to be “undruggable.” With many promising new KRAS-targeting therapies either now available or on the horizon, the field may be on the cusp of a revolution in treatment for patients with pancreatic cancer.

The Conquering KRAS in Pancreatic Cancer team will integrate clinical and laboratory approaches to understand why patients do or do not respond to the new therapies using breakthrough single-cell technologies to deeply investigate biology in organoids, mice, and humans. The team will develop pharmaceutical partnerships to accelerate the translation of new KRAS inhibitors into effective drugs for this disease. The large number of patients at Break Through Cancer partner institutions will enable trials that would be difficult at a single institution, since some patients have rare but important KRAS mutations.

The Conquering KRAS in Pancreatic Cancer project will be supported in partnership with the Lustgarten Foundation.

About Break Through Cancer

Founded in 2021, Break Through Cancer empowers researchers and physicians to both intercept and find cures for several of the deadliest cancers by stimulating radical collaboration among cancer research institutions. Break Through Cancer is led by Dr. Jacks, Founding Director of MIT’s Koch Institute for Integrative Cancer Research, the David H. Koch (1962) Professor of Biology, and Co-Director of the Ludwig Center at MIT. The Foundation is supported by a board that includes leaders from each of the five Break Through Cancer partner institutions and by a Scientific Advisory Board made of cancer experts from around the country. The foundation was launched with a challenge pledge of $250 million from Mr. and Mrs. William H. Goodwin, Jr, and their family, and the estate of William Hunter Goodwin III.